Camilo José Cela University (UCJC) and Ashoka Spain have reached a collaboration agreement in order to promote projects that allow the generation of effective, efficient, sustainable and fair solutions to specific social problems, as well as a change of mentality in the groups of people to whom these projects are directed, so that they can identify themselves as changemakers.

This framework of collaboration has led to the creation of the  University Expert Course in Changemaker Education, the first-of-its-kind in our country, which aims to equip current and future teachers, professors, social educators and anyone related to education with the methodological tools and specific resources needed to encourage and develop concerns and skills in others to respond to current challenges building a more just and sustainable society.

The agreement was signed by Nieves Segovia, president of  SEK Education Group (group that UCJC belongs to) and the president of Ashoka Spain, Maite Arango. This collaboration represents an important step for both institutions, since they share the same commitment to bring about change through education. 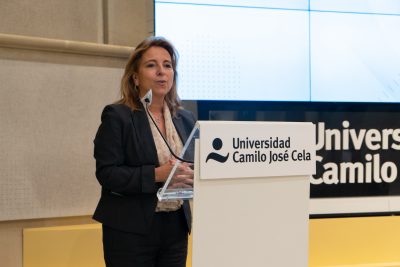 “We need to rethink how children and young people learn so that they have the ability to contribute to the world in which they live and that they are given values and tools such as empathy, teamwork, co-leadership, creativity and initiative”, said Maite Arango, president of Ashoka Spain.

The president of SEK Education Group said that “this should be the first step in forming an extensive network with other academic and social institutions, the first step in creating a training movement for trainers as agents of change so that they promote action for change in their students and that they can have an impact on their environment, on the climate, on their community and on their family”, explained Nieves Segovia. “Both institutions share a belief in the power of youth to transform the world, especially in these times of uncertainty and complexity,” she stressed.

Moreover, the collaboration framework will hold inspirational events to foster a change of mentality in education and increase demand for advanced learning models on the purpose and meaning of education from a changemaker perspective.