Camilo José Cela University and the SEK International Sports Academy, headed by Juan Carlos Segovia, director of the Marqués de Samaranch Olympic Chair, and José Javier Hombrados, director of Sports at SEK Education Group, organised the first Olympism Forum to discuss current events in Olympic sport, analyse the details of the organisation of the past Olympic and Paralympic Games in Tokyo, talk about the future of the Olympic movement and highlight the importance of including sport in the education of young people.

Emilio Lora-Tamayo, rector of Camilo José Cela University, opened the day with an address in which he stressed that “Olympism seeks to create a lifestyle by mixing sport with culture, education and international cooperation. It is based on the joy and satisfaction of effort, the educational value setting an example, social responsibility and respect for universal fundamental ethical principles”. 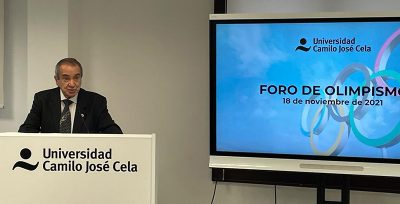 Which is why Lora-Tamayo stated that “for me, as rector of an educational institution, the key to excellent training and learning is the transmission of values and principles to students. Doing sport, in addition to physical development, leads to the acquisition of aptitudes and abilities of extraordinary importance for the all-round development of our students, such as self-control, empathy or self-regulation of problems”.

The rector of UCJC also highlighted that the Olympic Games were held in the midst of a global pandemic: “The organisation of the Olympic Games has been such a challenge that we must reflect and turn that experience into a true learning laboratory.”

In addition, he praised the technological advances that enabled us to enjoy sport in such a way that was unimaginable a few years ago, explaining that “the Tokyo Games featured the largest technological deployment to date, with the incorporation of robotisation, 5G, drones, Edge Computing and artificial intelligence”.

“Olympism is sport, culture and education”

Juan Antonio Samaranch Salisachs, vice president of the International Olympic Committee, was one of the most prominent speakers at the UCJC Olympism Forum. After thanking Camilo José Cela University for the invitation to this event, Samaranch wished to showcase the Olympic spirit: “The Olympic movement aims to create a better world through sport, making excellence, respect and friendship its flag.”

“The Olympic Games are, in an increasingly complicated world, an event that brings together the best youth in the world in an Olympic village in which people from all over the world, with different origins, cultures and religions demonstrate that we are all the same”, he added.

During his speech, Samaranch praised the educational methodology of Camilo José Cela University, stating that “Olympism is sport, culture and education, something that UCJC offers to create more all-round individuals by combining study with sports.”

Like Camilo José Cela University, which recently announced that it will educate forty refugee students from Afghanistan as part of its Integra Project, the International Olympic Committee, as Samaranch highlighted, was able to “gather in Tokyo, for the second time in history, an Olympic refugee team that has managed to give visibility to these people, these athletes, who have as much right as others to play sports and share the human ideals of the Olympic movement ”. 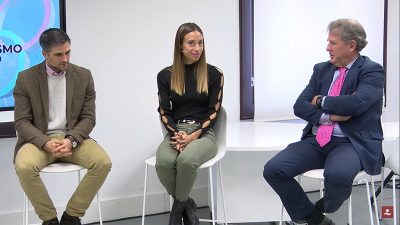 Alberto Jofre Bernardo, Managing Director of the Spanish Paralympic Committee, was also a guest at the UCJC Olympism Forum and the SEK International Sports Academy. Jofre talked about the latest trends and channels that the public used to view the latest Olympic Games: “The paradigm shift of Tokyo 2020 has been social media. People not only want to watch television at a certain time, the data says that they also want to watch the Olympic Games on demand”.

Olympic athletes Laura García-Caro and Pedro Gutiérrez, for their part, offered their stance on the Tokyo Games, where they both participated. García Caro, a student on the Degree in Psychology at Camilo José Cela University, competed in the 20-kilometre Olympic walking race. Gutierrez took part in the Paralympic Games as a goalkeeper for the Spanish visually impaired football team. “They say that the Tokyo 2020 Olympic Games have been the pandemic games, but we believe that they should be highlighted for their organisation,” both athletes said.