Lidia Moreno, Film and Audiovisual Fiction student at UCJC, lost in the final of the women’s category to Alba Rey García, from UCAM de Murcia, in a match ended 4-6, 6-4 and 6-2. 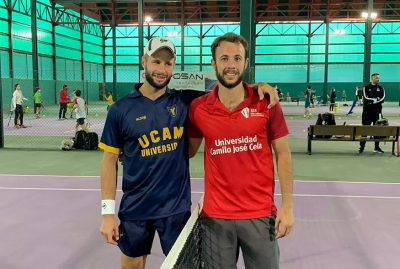 Manuel Montalvo, student of the joint Degree in Law and Criminology at UCJC was unable to prevail in his final against José Francisco Vidal Azorín, also from UCAM, who beat Montalvo by 6-3 and 6-2.

Camilo José Cela University was also represented in other categories of the championship. In the men’s double, José Luis Martines Piedrafita and Diego Nieto Martínez prevailed in the final sixteen, but lost in the quarterfinals and were unable to qualify for a medal. On the other hand, in mixed doubles, Servane de la Rocque and Óscar Meurisse dropped out after losing their first match.