The Association of Private and Independent Schools (CICAE) celebrated its 10th anniversary last Thursday with the motto ‘ten years working together for the future of education ‘ at an event hosted by Camilo José Cela University on its Villafranca Campus and in which 150 people from its educational community gathered and a further watched the live stream.

As part of the commemoration of CICAE’s anniversary, and in collaboration with Camilo José Cela University, directors of the association, among whom was Nieves Segovia, president of SEK Education Group, presented the trends in education that are charting the course of the private schools belonging to this network.

At the event, hosted by the presenter Patricia Betancort, the main milestones in the promotion and defence of the private and independent education sector were commemorated, including activities organised over these years to promote the exchange of experiences and good practices.

Emilio Lora-Tamayo, rector of UCJC, opened the event with a few words in which he recalled that “we are witnessing a 180-degree change in the relationship between students and teachers. A complicated and difficult scenario that nevertheless has given us the opportunity to reflected on the main challenges that our sector must tackle”. 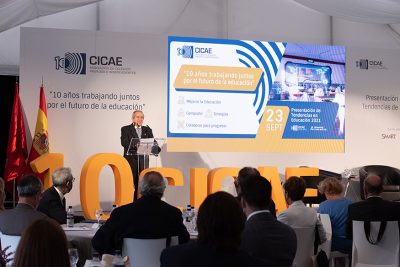 The rector insisted on the importance of “building a learning model based on co-creation, interdisciplinarity, with more fluid learning pathways, where technological skills are a cornerstone.” Furthermore, he advocated for the need to “redefine the purpose of the school as a “place” in order to develop a much broader concept of learning that serves the needs of our students today and in the future”.

“A new era of education in which our institutions, with the valuable support and initiatives from CICAE, exercise our leadership role to define an educational model that responds to this new social context,” said Lora-Tamayo.

For her part, Nieves Segovia, president of SEK Education Group and vice president of CICAE, reflected on the macro trends that are impacting education. She outlined in detail the main innovative pedagogies, among which he mentioned neuroeducation, evidence-based learning, meaningful learning based on students’ active involvement, multimodal literacies or competency-based learning, among others.

The president of CICAE, Enrique Maestu, recalled the beginnings of the association, in which nine founders advocated taking “a step forward in the face of the very clear need to renew teaching, methods and assessment and the organisation of spaces”.

The Spanish Secretary of State for Education, Alejandro Tiana, and the Madrid Regional Deputy Minister for Educational Policy, Rocío Albert, took part in the closing ceremony and thanked the association and the member schools for their work in improving education.