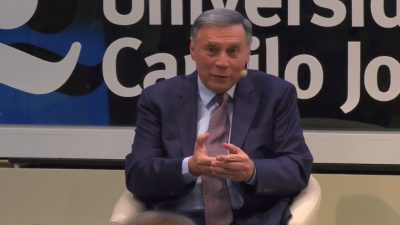 The book, in which the former president presents what he considers to be the “memories of a historical success in Latin America”, recounts the circumstances that led to one of the most momentous decisions in the country’s economic history: dollarisation. On January 9, 2000, then-president Jamil Mahuad decreed that from that moment on all monetary, commercial and financial transactions in the country would cease to be carried out in the national currency (the Sucre) and would be carried out in United States dollars. Ecuador’s economy was dollarised.

The presentation of the book began with a speech by Nieves Segovia, president of SEK Education Group, who, endorsing the words of Fernando Henrique Cardoso, former president of Brazil, affirmed that Jamil Mahuad, now a professor of Negotiation at Harvard University and in UCJC CIGMAP “has the ability to speak in a way that seduces people, and with this way he traps the reader by narrating memories that constitute an example of human courage and great strength in the face of adversity, which are an example of how to grow in difficulties”.

From the point of view of Jorge Santiago Barnés, “making decisions, negotiating, dollarising a country, living what it has experienced, reinventing itself, learning from what happened, all that is what the author tells us in a book of more than a thousand pages. He not only tells his story in the first person, but he outlines part of the history of a country that we can very well make ours at this time in Spain, our country, and in many others. It is a book of over 1000 pages with a story that he has been preparing for over 20 years, a political and economic book, necessary for Latin America and for the rest of the world”.

Así dolarizamos al Ecuador. Memorias de un acierto histórico en América Latina features decisions in times of crisis, diplomacy and negotiation. For the director of CIGMAP, “decisions are like Chinese bamboo. They sprout underground, grow a horizontal and vertical network of roots, that rise to the surface only when they has a solid base after five years. Decision-making is the same, you have to plant, you have to wait, you have to be patient to receive the fruit. In life you neither win nor lose, in life you learn, you spin, you unravel and you re-spin, you grow, you discover, you write and you erase and you rewrite again. That is negotiating. And this book is a true jewel of negotiation. It is a book designed twenty years ago that will also bear fruit for the next twenty years”.

Following on from Jorge Santiago’s words, it was the turn of Manuel Alcántara, former vice-rector of the University of Salamanca and an expert on Latin American politics, who focused on and explained the circumstances of Ecuador in the period that the book narrates. After him, the author himself, Jamil Mahuad, took the floor, who fully discussed the memories of the entire experience with the rest of the participants.