A group of students from degrees in film, communications, protocol and digital arts at Camilo José Cela University took part in the 35th Goya Awards gala, which was held in Malaga on 6 March. 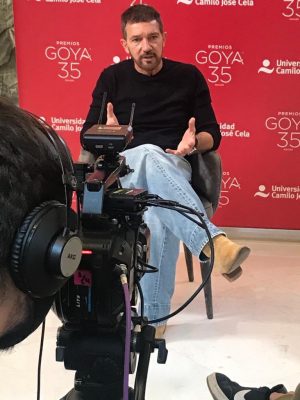 Students actively collaborated in the recording of the behind the scenes making of film for the most important annual film awards in Spain. This academic activity featured work by the Film Degree students who directed the filming; the Degree in Communications  students who were in charge of the writing and interviews with different directors and actors; and the Degree in Digital Arts students who carried out the editing and graphics.

Antonio Banderas and María Casado hosted and presented the event with none of the nominees and winners physically present at the Soho CaixaBank Theater in Malaga due to the restrictions in place due to the COVID-19 pandemic. The actor from Malaga was precisely one of those interviewed by the students from Camilo José Cela University to be part of the backstage video of this year’s Goya Awards.