Raúl Entrerríos and Ángel Fernández, along with the rest of the Spanish handball team, won the bronze medal at the 2021 World Championship, played in Egypt from 13 to 31 January. Entrerríos is a former student of Camilo José Cela University, while Fernández is currently studying his degree in Physical Activity and Sports Sciences at UCJC.

The ‘Hispanos’, as the players of the men’s national handball team are commonly known, achieved this historic medal after defeating France in the match for third and fourth place by 35 goals to 29. 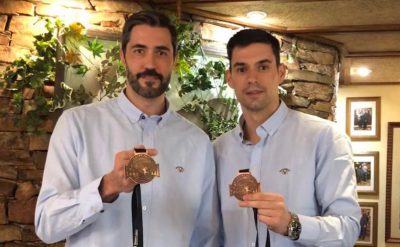 Ángel Fernández took his fourth medal in Egypt with the ‘Hispanos’, a bronze that he adds to the other won in the 2018 Mediterranean Games and the two gold medals won in the 2018 and 2020 Europeans. In addition, among other individual awards, he was named best left winger in the ASOBAL League, consecutively, in 2016, 2017 and 2018.