During the opening ceremony of the 6th Felipe Segovia Symposium, Professor Stephen Heppell, Director of the Felipe Segovia Chair for Innovation in Learning at Camilo José Cela University, gave a conference on the importance of breaks, rest and free play for students’ emotional and academic growth.

“In the last century, teachers already realised that breaks and rests at school were very important for the cognitive development of students,” said Heppell, who showed two MRI scans in which the difference in brain activity could be seen between a student who had been sitting for several hours attending his lessons, and another who came from a twenty-minute break in which he had been able to disconnect and play with his classmates, the latter having the most active markers by far. 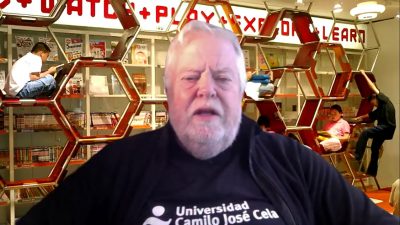 The use of toys was another part of children’s development that Stephen Heppell highlighted during his presentation. “Students can learn engineering and programming simply by playing with a drone and programming it to fly around the classroom and record with a small built-in camera.” The teacher reflected on how technological advances have also made toys much more modern and sophisticated, and the students have benefited greatly from this.

The importance of motivation in learning

Teaching and learning techniques have evolved greatly in recent years, and today students can even direct their own learning. In this sense, Heppell believes that “for many children, it is very motivating to be able to measure how much they are evolving in their learning”, something that, in the words of the education expert, is very beneficial.

Finally, Heppell wanted to emphasise that any evolution that a student intends to undertake requires a lot of effort and work. “The best learning experiences are not easy to achieve, it takes sacrifice and motivation”, he concluded.

This website uses cookies to improve your experience while you navigate through the website. Out of these cookies, the cookies that are categorized as necessary are stored on your browser as they are essential for the working of the basic functionalities of the website. We also use third-party cookies that help us analyze and understand how you use this website, to store user preferences and provide you with content and advertisements that are relevant. Such cookies will be stored on your browser but only upon procuring consent.
You will also have the option to opt-out of these cookies should you want to. But opting out of some of these cookies may have an effect on your browsing experience as per the descriptions elucidated against the respective categories below.
Necessary