Francisco López Muñoz, Deputy Rector for Research, Science and Doctorates at Camilo José Cela University, was appointed Foreign Corresponding Academician of the National Academy of Medicine of Bolivia (ABOLMED) on 9 November, in the first remote online inauguration carried out by the Academy, due to the COVID-19 pandemic.

In his acceptance speech, López Muñoz, who will occupy seat number two of the Foreign Corresponding Academician Section, spoke about the advent of the antipsychotic era and the role played by serendipity in the discovery of chlorpromazine and haloperidol and the clinical introduction of the first two antipsychotic drugs, chlorpromazine, in 1952, and haloperidol, in 1959. 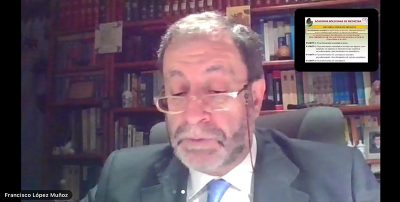 In addition, he highlighted how his research group has developed an operational definition of serendipity based on the discovery of something unexpected or not intentionally sought, regardless of the systematic process that led to accidental observation, establishing four patterns of accountability.

The Bolivian Academy of Medicine was founded under the aegis of the Bolivian Medical College on 21 September 1989. Over the past 31 years, ABOLMED has played a relevant role in advocating for medical disciplines and the promotion of health in the Andean country, and has also actively participated in the recovery and respect of the rights of health professionals from Bolivia. ABOLMED has also served, during the period between 2018 and 2020, as Presidency of ALANAM, the Latin American Association of National Academies of Medicine, Spain and Portugal.