Francisco López Muñoz, Deputy Rector for Research, Science and Doctoral studies at University Camilo José Cela, was named a full member of the European Academy of Sciences and Arts, in a ceremony held on 7 March at the University of Salzburg (Austria), coinciding with the 30th anniversary of this institution.

The European Academy of Sciences and Arts, founded on 7 March 1990, is a European non-governmental institution committed to promoting scientific and social progress in Europe. Its members are scientists, artists, professionals and political leaders focused on innovative research, interdisciplinary and transnational collaboration, who also promote the exchange and dissemination of knowledge. 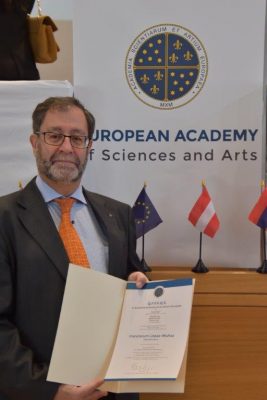 Currently its members include 2,000 academics from different countries of the world, 69 of them Spanish. Among these are also 32 Nobel laureates.

The Spanish Delegation of the European Academy of Sciences and Arts studies the major world political and economic blocs, their evolution and new trends, analysing, evaluating and raising awareness on the social, economic, international and scientific situation in Spain and the rest of Europe, with the aim of helping to bolster European integration and its institutions.

This delegation also contributes to Spain continuing to establish itself, more quickly and with greater efficiency, as a leading member of the European Union.

The Spanish Delegation of the Salzburg Academy of Sciences and Arts signed a teaching and research agreement with University Camilo José Cela and established its headquarters at the UCJC Graduate School, in its Almagro building.

Thanks to this agreement, University Camilo José Cela has hosted, up to now, three conferences and has launched a programme of bimonthly seminars.

We use own and third party cookies to provide a better user experience, and have data traffic on our site.
If you continue to browse, consider accepting its use. You can get more information on our privacy policy Accept