The Rector of University Camilo José Cela, Emilio Lora-Tamayo, gave an interview to the director of Servimedia, José Manuel González Huesa. In the interview, Lora-Tamayo said UCJC ‘embarks on a new stage marked by a model of continuous and collaborative learning, at the forefront of an educational system that focuses on excellence and talent, innovation, internationality, knowledge transfer, creativity and entrepreneurship.’

Those are the aspects on which the new UCJC model is based, as “the first university of the 21st century“, aimed at offering its students “an all-round education, preparing intelligent, free, critical and capable citizens ready to excel professionally” the Rector explained. 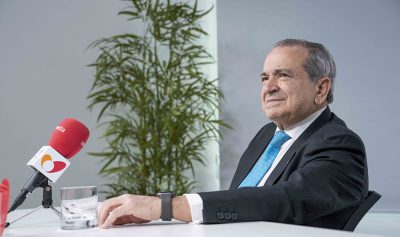 One of those aspects, entrepreneurship, will be a core subject in the new syllabus offered by University Camilo José Cela in this 2019/2020 academic year, which also marks its 20th anniversary. This is why UCJC has sought approval for its Degree in Entrepreneurship and Business Management, “a pioneering initiative in Spanish higher education, which will strengthen collaboration between businesses and universities to go on to kick start new projects and help create jobs,” said Emilio Lora-Tamayo.

Regarding the events marking the university’s 20th anniversary, the Rector stressed that there will be “20 milestones in the history of UCJC, a tribute to Camilo José Cela and 20 conferences related to current events and topics tied to the UN Sustainable Development Goals (SDGs)“.

see the full interview on ‘SERVIMEDIA’