The former president of Congress and former Minister of Defence, José Bono, inaugurated the Camilo José Cela Forum: Quo vadis, Spain, an initiative by University Camilo José Cela as part of the celebrations marking its 20th anniversary, and the newspaper El Español, which is celebrating its first five years this year.

In addition to Nieves Segovia, President of SEK Education Group, Emilio Lora-Tamayo, Rector of University Camilo José Cela and Pedro J. Ramírez, Editor-In-Chief of El Español was the former Minister of Defence and former President of the Junta de Castilla-La Mancha, who gave a speech defending the political class as well as urging them to be self-critical. “I speak with concern of one who knows that he has been a politician. Only 6% of Spaniards are interested in politics” he said in the opening of his address to the auditorium of the Almagro building packed with students, teachers and subscribers of the newspaper. According to Bono, Spanish society stands heads and shoulder above its political class. 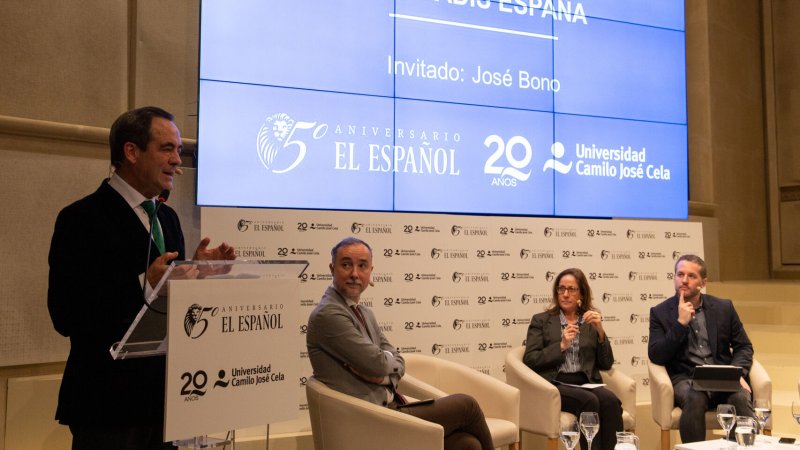 “I want to talk about Spain as something we have and not as something we do, as a set of things that enable us and not as something that gags us.” In his speech, Bono gave his view of current Spanish politics, with special emphasis on the Catalan issue, and encouraged “intelligence and moderation” in those who were sitting down to negotiate. “I think that advocating politically requires moderation” and he explained that nowadays “you seem to have to ask for forgiveness when using moderation.” He also decried intolerance and said people should “stop having respect for dogma and uncompromising people. Listening to someone who thinks differently is not just good manners, it also shows intelligence.”

The former government minister told several anecdotes from his life in politics, and advocated for the right to disagree, of “the politics of the Spanish transition, because at that time I felt generous, I felt patriotic” and stressed that “Autonomy, equality and difference must shake hands.”

Following his address there came a panel discussion, where the moderator Maria Peral, deputy editor of El Español, asked the former minister what he would do about the Catalan question if he were in government. José Bono said that he would do “whatever” he could within the law to avoid secession and would not agree on concessions that ended up leading to that outcome.

Also taking part in the panel were Jorge Gallardo, teacher and director of Degree in Communications at UCJC, who said that this forum was “live communications practice” and confessed he was “delighted” to have different personalities who, from a plural standpoint, talked about their vision of Spain and its future. The journalists from El Español Cristian Campos and Daniel Basteiro also took part in the panel.

This first forum is part of the pioneering partnership between the world of journalism and education, through which both entities seek to generate and disseminate knowledge in various fields of information and academic news.

“There is no greater award or mark of glory than to be involved with an institution that holds academic excellence as its maximum aspiration” said Pedro J. in his welcome address. “Places like this are the best venues for discussing current affairs and future issues,” said the President of SEK Education Group.

The Camilo José Cela Forums – which will feature ten conferences during this 2020 – aim to address current affairs and discuss political, intellectual and cultural spheres.

The second forum, to be held on 19 March, it will feature Manuel Valls, Prime Minister of France between 2014 and 2016 and Councillor for the Barcelona City Council since 2019. GO BACK TO HOMEPAGE

This website uses cookies to improve your experience while you navigate through the website. Out of these cookies, the cookies that are categorized as necessary are stored on your browser as they are essential for the working of the basic functionalities of the website. We also use third-party cookies that help us analyze and understand how you use this website, to store user preferences and provide you with content and advertisements that are relevant. Such cookies will be stored on your browser but only upon procuring consent.
You will also have the option to opt-out of these cookies should you want to. But opting out of some of these cookies may have an effect on your browsing experience as per the descriptions elucidated against the respective categories below.
Necessary